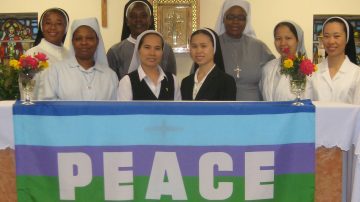 Posted at 09:15h in Student News, Uncategorized by admin

On September 21, international resident students of Assumption College for Sisters. Denville, gathered in the convent chapel to pray a special Evening Prayer commemorating the International Day of Peace.  The altar was surrounded by flags representing the countries of origin of the resident students. At the beginning of the prayer, ACS faculty member, Jean Wedemeier, explained and distributed mission rosaries that she herself made, reminding the students and those assembled, that only through prayer will world peace be achieved.

Assumption College for Sisters is a two-year Sister Formation College, the only one of its kind in the United States.  For more information, visit www.acs350.org.