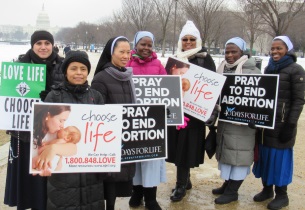 Posted at 15:47h in Company News, Student News by admin

STUDENT LIFE: MARCHING FOR THE UNBORN

The Sister students from Assumption College for Sisters (ACS) along with parishioners from St. Mary’s Denville, St. Peter’s the Apostle, St. Anthony of Padua and a student along with her parents and sister from Morris Catholic High School traveled on January 18th to Washington DC from St. Mary’s Church Denville sponsored by The Knights of Columbus Councils 514 and 3359.
The group with many others from around the nation spent Friday afternoon marching to fight for an end to legalized abortion in the United States. The March started at the National Mall with a rally of speeches, marched down Constitution Avenue passed the U.S. Capitol building and ended at the Supreme Court.

Growing out of a firm belief in the dignity of each person, administration, faculty and students at ACS strive to see the face of Jesus in all. The March for Life is a way to embrace unborn babies in the womb by giving them a voice. The students of Assumption College for Sisters want to raise awareness that God is pro-life and Assumption College for Sisters supports all stages of life. The students have also attended and prayed in front of an abortion clinic supporting 40 Days for Life which is an international group that campaigns against abortion primarily in the United States. ACS students attend the 40 Days for Life campaigns managed by Morris County Right to Life.