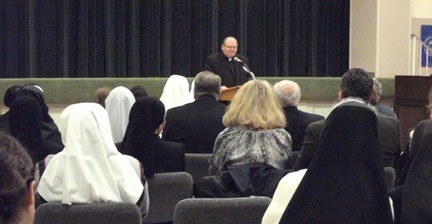 Posted at 13:36h in Uncategorized by development

Msgr. Raymond Kupke, Diocesan Archivist, presented “Vatican II: Fifty Years Later” to Sisters, students, and the public at Assumption College for Sisters on Sunday, February 24.  As he highlighted some of the little known facts before, during and after the Council, he enthralled his audience with an actual copy of one of the documents that the Council Fathers had in their hands to review during the council.  This was of special interest to the audience because it was prepared by James J. Norris, a NJ native, appointed by Pope Paul VI to be one of the lay auditors at the Second Vatican Council.    He also showed the audience a medal given to a lay participant at Vatican Council II.  Msgr. Kupke is shown here exhibiting the two artifacts while members of the audience come for a closer view. 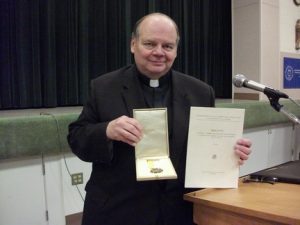